Spot on, decolonise the present! #’Greek’Crisis

Greece and the Underdevelopment of Europe

Following the referendum in Greece it is time to think further about the geopolitical sea change indicated by the European economic crisis. There is tangible shock, even among some conservative commentators, at the zealotry that is still being displayed by Greece’s creditors, who continue to refuse the Syriza-led government any alternative to indefinite debt bondage despite a decisive popular rejection of the bailout proposals.

That Greece was allowed to miss last week’s deadline to repay the International Monetary Fund because of the refusal of the ‘troika’ (European Commission, European Central Bank and International Monetary Fund) to compromise, was indeed a striking display of neoliberal dogmatism. Many across Europe have been keen to demonstrate their solidarity with the Greek people whose living standards are being decimated under perpetual austerity and whose situation is likely only to get worse. Yet, perhaps a further, more unsavoury element underlies our reaction to the Greek crisis. What has really disconcerted spectators is that the titans of international finance capital are willing to dismantle not just a nation-state but a European nation-state.

For decades now, techniques of conditioned loan agreements, debt repayment plans and structural adjustment programmes have been used to discipline countries in the Global South to the demands of the market. Following the naked exploitation of the imperial era, post-colonial states quickly found themselves reliant upon exorbitant loans to try and catch up with the ‘developed’ world. These loans, often brokered with self-serving, corrupt administrations, quickly turned into Sisyphean debt repayment programmes which crippled ‘developing’ economies, all while the European left looked on with superficial concern for the plight of the beleaguered populations.

Even when anti-globalization activists would protest the unjust workings of the Bretton Woods institutions, the assumption was that they were generously taking up the cause of the unfortunate third-world. The potential threat to Europe itself was not fully appreciated, because our understandings of the global order continue to rest on an assumed difference between the European World (‘The West’) and the non-European world (usually dismissed as ‘The Rest’)

This was the division on which our modern world was built. Carl Schmitt tells of how amity lines were used in the 16th Century to draw a distinction between an intra-European space, where the rule of law was respected and reciprocal relations among the states was encouraged, and the space of ‘no peace beyond the line’ where the only law was the violence of colonization, piracy and war. This logic of an essential difference between the intra-European world and its constitutive outside persisted well into the 20th century.

While Frantz Fanon and Hannah Arendt are famous for their intellectual opposition, one thing they did agree on is that there was nothing that occurred under the Third Reich in Germany that had not previously been suffered by the colonised peoples of the Global South. Arendt and Fanon recognised that what made fascism truly horrific for most people was not just what was happening but where it was happening. As Fanon’s mentor Aimé Césaire stated, the paradox of the European left is that ‘they tolerated Nazism before it was inflicted on them…because, until then, it had only been applied to non-European peoples’

Could the same not be said of the response to the crisis in Greece? The more perceptive scholars concerned with today’s situation have already begun to recognize the parallels. In his book Philosophy and Resistance in the Crisis, Costas Douzinas states:

“The Greek crisis has an element of poetic justice. The neo-colonial strategies imposed on Africa and Latin America are reimported for the first time to the continent, which invented and spread them…‘stabilize, privatize, and liberalize’ is the mantra of the IMF and the World Bank. Every aspect of this standard recipe is now applied to Greece… The Greeks are well on the way to becoming the European colonials.”

Greece has been relegated to the ranks of Somalia, Honduras, Democratic Republic of Congo and Zimbabwe by becoming the first European country to default on an IMF loan. The €1.6bn missed payment is also the largest ever by an IMF member. Popular rhetoric has blamed the situation on inherent Greek profligacy, displayed by their early pension schemes and special interests. This narrative carries the echo of the lazy conflations between the nature of places and its peoples that underpinned the earliest European imperial adventures.

Columbus’ travel diaries reveal how he drew on a theory of place offered by Albertus Magnus and Pierre d’Ailly to equate the differing temperature and climates of the ‘new’ and ‘old’ worlds with differing levels of humanity to be granted to the European and non-European. For Columbus, the natives of the new world were inherently childlike due to their plentiful surroundings; hence they could not be treated as equals. Likewise, we now hear talk of the lazy, petulant and irresponsible nature of the Greek people, whose sunny climate explains their inability to adopt the protestant work ethic of the industrious Prussians.

The reality is, according to the OECD, that the average Greek worker has worked 48% more hours than the average German worker; the source of the crisis is a failing of the international financial system. Ever since the IMF “assisted” Greece in 2010, the Greek economy has been in depression. 25% of its GDP has been lost under structural adjustment programs labelled “austerity packages.” 90% of Greece’s IMF debt went directly to repay other European institutions.

That this rhetoric is being applied to Greece is even more remarkable when we consider its cherished position in the European imagination. Though the ancient Greeks identified very differently, their society has been claimed as the basis of European civilisation itself. That the European project is willing to cannibalise the site of its own intellectual forefathers shows the fallacy of European exceptionalism. Others within the EU project – Portugal, Spain and perhaps most of all, Italy – are steeped in economic stagnation and ever-growing deficits. What befalls Greece could reveal the future of many in Europe.

Therefore it is imperative that the European left learn the histories of the Global South. Rafael Correa, president of Ecuador explains:

We Latinos, we are experts in crisis…. we look at Europe with a sense of worry because in Europe you are making the same mistakes as we did. Greece…all the conditions the country is submitted to: IMF packages, we Latinos we’ve been there. All those measures are not meant to overcome the crisis, they are just to liquidate the debt.

To know the history of the Global South is to know that the continuing demands of austerity placed upon Greece are not the solution to the crisis; they are the crisis. It is to know that plans to liberalise the economy and cut public spending in favour of debt repayment are not designed to help the Greek people but to create spaces of minimal regulation, relaxed environmental controls, low corporation tax and stripped worker protections, a space where the 21st Century laissez faire capitalism can be fully unleashed. 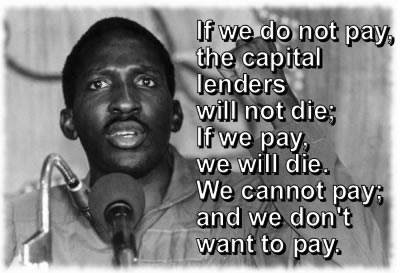 Thomas Sankara, then President of Burkina Faso, in 1986

The IMF know that Greece’s debt isn’t sustainable without write offs, but at the time of writing it seems the Greek economy is unlikely to receive much help from its creditors, at least not without ousting the elected Syriza government. International capital is telling Tsipras the same thing it told Allende and Sankara – we do not care for your democracy.

Even if Tsipras does manage to escape from this trap with his premiership and principles still intact, it is now explicitly clear how committed finance capital is to dismantling social-democratic welfare states across the European continent, regardless of the wishes of their inhabitants.

The growing ability of the creditors to suffocate the livelihoods of everyday people in the service of neoliberalism means only bad news for the masses of both the Global North and Global South alike. But to effectively resist, European leftists will have to reject their assumed exceptionalism and re-read the experiences of the post-colonial state, only no longer with patronising pity. It has never made sense for thinkers in Europe to draw only upon a geographically limited gene pool of forefathers. Now more than ever this Eurocentric habit must be broken. It is long overdue for Europeans who mean to think seriously of their crisis to start to read the likes of Walter Rodney’s classic “How Europe Underdeveloped Africa”,  along with Galleano, Fanon or Eric Williams. Not to sympathise shallowly with the ‘other’, but to better understand Europe’s own past, present and future.

Following the referendum in Greece it is time to think further about the geopolitical sea change indicated by the European economic crisis. There is tangible shock, even among some conservative commentators, at the zealotry that is still being displayed by Greece’s creditors, who continue to refuse the Syriza-led government any alternative to indefinite debt bondage despite a decisive popular rejection of the bailout proposals.

That Greece was allowed to miss last week’s deadline to repay the International Monetary Fund because of the refusal of the ‘troika’ (European Commission, European Central Bank and International Monetary Fund) to compromise, was indeed a striking display of neoliberal dogmatism. Many across Europe have been keen to demonstrate their solidarity with the Greek people whose living standards are being decimated under perpetual austerity and whose situation is likely only to get worse. Yet, perhaps a further, more unsavoury element underlies our reaction to the Greek crisis. What has…